Canada tallied five medals at the World Athletics Championships Doha 2019, so it was not surprising that Marco Arop’s excellent seventh-place finish in the 800m would be somewhat buried in the team’s performance review.

Just 21 years old at the time, the tall Sudan-born runner had earned the Pan American title two months earlier, running a then personal best of 1:44.25. But few expected him to survive the harsh preliminary rounds in Doha which required tactical nuance, stamina and most importantly experience at the highest level. Clearly the young man was up to the challenge and has immense potential.

Despite the uncertainty caused by a world pandemic, Arop has continued to make progress this year, setting a new personal best of 1:44.14 while finishing third at the Wanda Diamond League meeting in Monaco last month. That extraordinary result was followed by two second-place finishes in Bydgoszcz and Stockholm. In the latter he led down the home straight but couldn’t hold off world champion Donavan Brazier. Still, he ran a very good 1:44.67.

But it was the Monaco result which stoked his confidence, particularly since it was three seconds faster than his season opener in Atlanta, a four-and-a-half hour drive from his apartment in Starkville, Mississippi.

“I ended up running 1:47 high in Atlanta and I could feel there was so much more left in the tank,” he remembers. “Coming into Monaco I wanted to run fast and I was just lucky enough to be able to travel there and have that calibre of competition there. It was the perfect set up, the perfect race for me.”

Shortly after his brief European excursion, he returned to his training base in Starkville where he voluntarily quarantined for 14 days. Although he has a year and a half of academic studies in business information systems to complete, he chose to forego his eligibility at Mississippi State University to accept a contract from Adidas. Now, with a positive frame of mind, he believes an Olympic podium finish is attainable.

“Definitely! That’s just the way I have to look at it if I want to succeed,” he says. “It’s a long way from (now until) Tokyo 2021 and I am just hoping that I will be ready come the day and I am doing whatever I can to stay healthy, stay fit and become stronger.

“My goal is to win the Olympics. I know there are some really great competitors out there and I respect them all. But, at the end of the day, I want to win just as much as anybody else.”

That might be construed as youthful naïveté especially since he only became serious about athletics in his senior year at Edmonton’s St Oscar Romero Catholic High School – barely three years ago. Nevertheless, under the tutelage of Voleo Athletics Club coach Ron Thompson, Arop has become a quick study in 800-metre running, latching on to heroes from the past whose physical size equals his own 1.93m height.

“I have met (1984 Olympic 800m champion) Joaquim Cruz and I have watched him race in a couple of YouTube videos,” Arop says. “Guys like him and David Rudisha are huge role models and inspiration for me and I try to race like them. Front running is my strength.

“Coach Ron would say I can’t run the same as some of the other guys because I am not the same size. If I am in the front, it helps me stay out of trouble and control the race. That’s one thing I like to do – take the pace and decide when and where I should kick.”

In this regard, he is similar to fellow Mississippi State alumnus Brandon McBride who holds the Canadian record of 1:43.20. Arop credits his fellow Canadian, whose time at MSU had ended by the time Arop arrived, with the decision to attend MSU.

“One day Ron was at my house and said he had Brandon’s coach on the phone and it ended up being Chris Woods,” Arop recalls. “Coach Woods spoke with me of his interest in me coming here (MSU). It was the first NCAA Division One offer I had received. I was really excited and my parents were excited. It was a pretty easy choice with the success they had with Brandon here.”

Today Woods (MSU head coach) and Thompson share responsibility for Arop’s development and both agree that increasing his strength over the autumn and winter is essential to furthering his success. Surprisingly his best 400m time is just 47.39 and in some races he has gone through the first lap in 49 seconds. Speed is therefore another element on which to improve.

“I never really trained for the 400m so am not sure where my 400m potential is. It would be really cool to try. The last 400m I ran I ended up pulling my hamstring so the day didn’t turn out too well,” he says laughing.

Arop is clearly a soft spoken, humble young man who has taken up guitar and keyboards to distract himself from athletics. He enjoys playing music from movie soundtracks.

“I don’t have the confidence in my abilities just yet but I think it will come soon,” he says. “I am getting the hang of it now and will try to impress my roommates.”

He is also quick to acknowledge the sacrifices made by his parents to bring him and his five brothers to Canada at a time when Sudan was enduring its second civil war. He was three years old when they left Khartoum for Egypt. The family spent almost two years there waiting to qualify for refugee status in Canada.

“My parents just wanted a better future for their kids,” he says, turning serious for a moment. “The situation in Sudan wasn’t always great. It was a war-torn country, so moving to Canada was probably the best move they made. They made a lot of sacrifices for me and my brothers and we are trying to return the favour.

“My dad didn’t really have a formal education; high school was the farthest he got. There weren’t a lot of opportunities for him besides joining the military, so leaving seemed like the only opportunity. My mum was the same way. She didn’t have education either. She had a lot more opportunities here than in Sudan. I still wonder how they did it.”

It has been nearly 20 years since the family left Sudan. Arop and his brothers have plans to finance a trip for their mother to visit family members there once the pandemic is contained. Meanwhile, he is on high alert when it comes to the racism that has reared itself in the United States.

An incident involving McBride, during which he was chased by men carrying guns in the back of a pickup truck while out running in Starkville, has been reported widely in Canada. Arop therefore has learned to take precautions.

“I have to stay cautious; I stay close by the university. I usually don’t run alone,” Arop says. “I have heard Brandon’s story. It completely shocked me knowing, where I am, everyone seems pretty friendly.

“Coming down south, you sort of notice the difference. Strangers are quick to greet you. But still, knowing there are still people like that around, it’s always something in the back of my mind when I’m doing my runs or going about my day. It’s something that needs to be talked about more and I am pleased Brandon had the courage to share his story.”

The two Canadians will be a formidable duo when the Tokyo Olympics are finally contested. There is respect between the two ever since Arop upset his rival at the 2018 Canadian Championships. McBride beat Arop at the nationals last year. Now Arop has another season under his belt and perhaps a better understanding of what is required to get on the Olympic podium. Watching his teammate miss out on making the World Championships final in Doha was an eye-opener, especially since he believed McBride was a medal contender.

“You can’t really take anything for granted,” Arop now says. “You never know who is going to come out on top.

“That’s one thing I want to take into Tokyo: not leaving anything to chance. Prelims and the semifinals and then, in the final – it’s who is having a good day.”

BACK
Pages related to this articleAthletes
Marco AROP

Dabo and Busby after Doha: How a random act o... 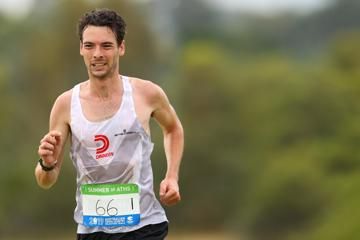 Back from the depths of despair, Summers look...

Back to full health, Bromell's biggest goal i... 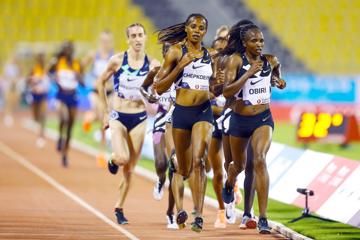 Obiri ponders plans for Olympics and beyond...