From Olympic heartbreak to world indoor delight for Samba-Mayela

Imagine working for years towards a specific goal – that of competing at an Olympic Games – only to have it snatched away moments before it happens.

Cyrena Samba-Mayela knows how that feels.

The French sprint hurdler was warming up for her opening race at the Tokyo Olympics last year when she injured her hamstring, an old problem resurfacing at the worst time, forcing her to leave an absent lane on the track and a huge void in her heart.

“It was hard, really hard,” she says now. “Hard to the point where I had it in my heart for more than one month. I didn’t want to go to holidays or enjoy anything. It was like a dream torn away.”

She was just 20 at the time, young enough to come again, and Samba-Mayela was adamant that she would, committing herself to strengthening her body better than ever in the off-season.

“The point was not to go back to this (situation),” she says.

At the World Athletics Indoor Championships Belgrade 22, Samba-Mayela had the kind of magical day that put her Olympic experience firmly behind her, winning her 60m hurdles heat in 7.91 in the morning, her semifinal in 7.85 that evening, then winning gold in the final in 7.78, a French record.

“I’m in a dream,” she said after the race, and this time it was one that couldn’t be torn away. 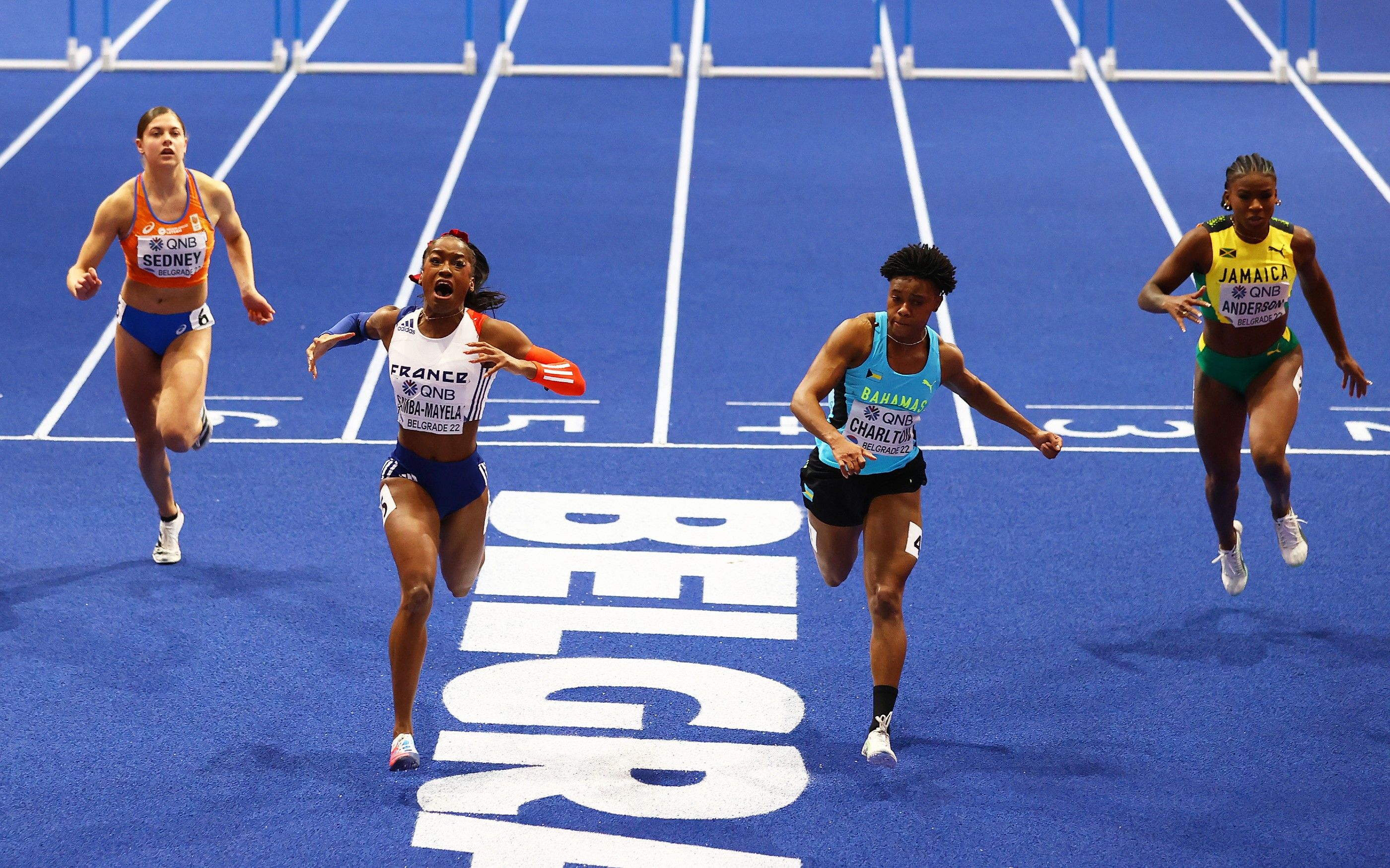 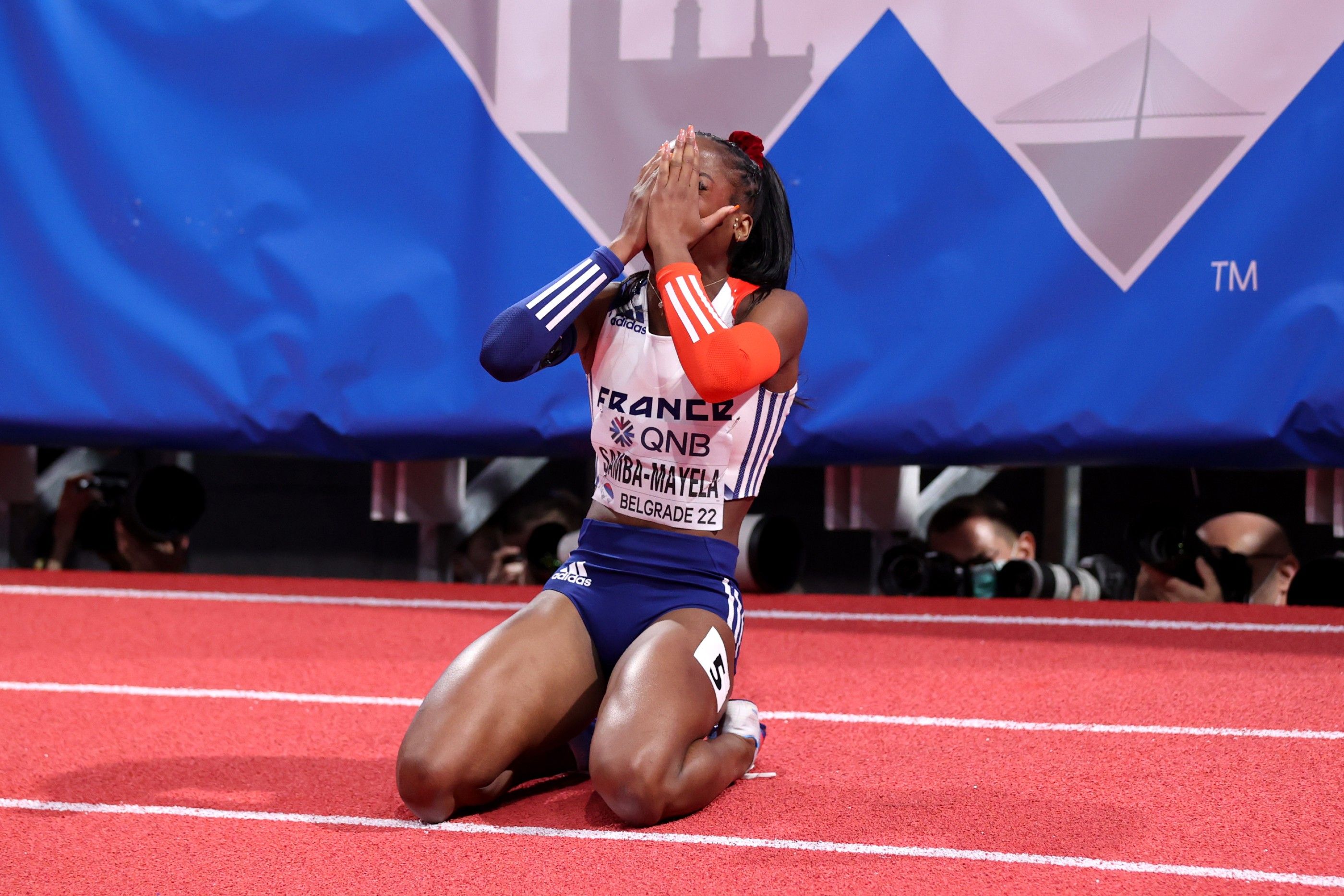 One of the first calls she made that night was to her family, who were watching back home in Champigny-sur-Marne, a suburb of Paris. “They cried,” says Samba-Mayela. “They remembered all the bad things I went through, and they were really proud of me.”

Her parents, who are of Congolese origin, are both former athletes and they encouraged Samba-Mayela – who was born and raised in France – to take up athletics when she was 15.

Before that she’d done judo, basketball, gymnastics and ice skating, sports that she believes stood to her when she turned to hurdles, having started out as a sprinter.

Her first coach at Athletic Club Paris Joinville was Albertine Koutouan, an Ivorian who’d been African champion in the heptathlon in 1990 and who first encouraged Samba-Mayela to try the hurdles, figuring it’d be a good fit.

“I fell in love directly,” she says of the event.

After another year of training, she went to the World U18 Championships in Nairobi, Kenya, in 2017 and showed her world-class credentials, clocking a wind-assisted 12.80 over the 76.2cm barriers to win silver behind Jamaica’s Britany Anderson, with Yoveiny Mota of Venezuela just behind them in fourth.

Fast forward four and a half years, and Samba-Mayela, Anderson and Mota were back in another global final – this time at senior level in Belgrade. 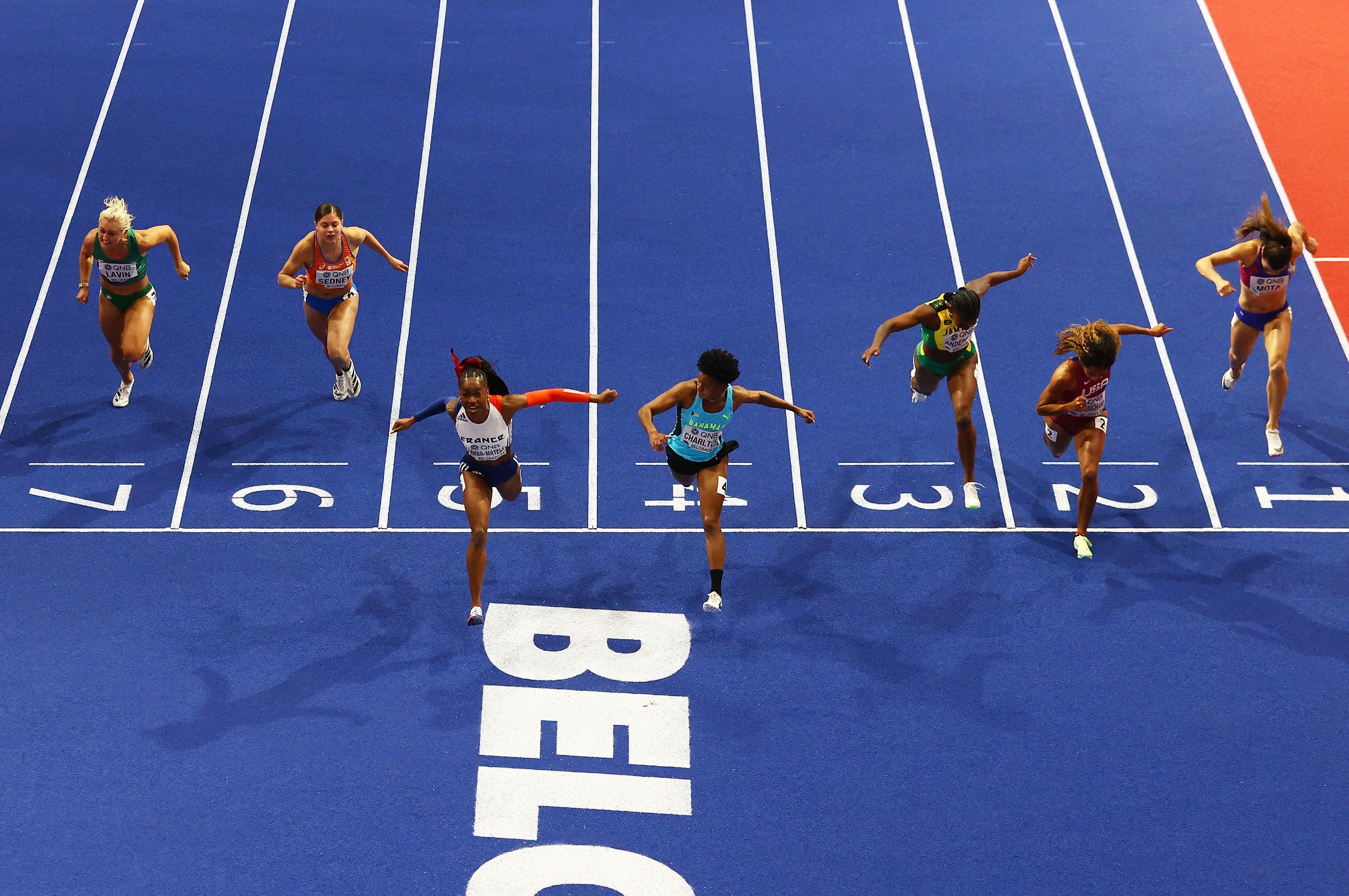 For Samba-Mayela, a lot had changed in the years since. These days she’s no longer at school but at university, studying architecture and interior design remotely while training at INSEP, the French Institute of Sport, Exercise and Performance.

For the past two years, her career has been guided by Teddy Tamgho, the 2013 world champion in the triple jump who’s one of only six men in history to surpass the 18-metre barrier.

How is Tamgho as a coach?

“A perfectionist,” says Samba-Mayela. “But he knows what he’s doing. He’s a visionary, and that’s the most important thing. He’s a great coach, a really great coach.”

Working alongside her under Tamgho is Burkina Faso’s Marthe Yasmine Koala, a 12.81-second hurdler last year, and Samba-Mayela says the norm for them is about four hours of training each day.

But it’s one thing being physically ready. Since Tokyo, Samba-Mayela has put more work than ever into being psychologically primed for the big stage.

“I changed so much, learned how to master the mental side,” she says. “If you’re not good in your mind, it’s not going to work.”

She has proven in the past that she can perform when it counts, winning silver at the European U23 Championships last year in 12.80, a few weeks before that hamstring issue arose in Tokyo. Having rehabbed and recovered from that, Samba-Mayela came back stronger than ever in 2022, finishing second at the World Athletics Indoor Tour Gold meeting in Karlsruhe in a PB of 7.84 before winning the French indoor title in 7.92. 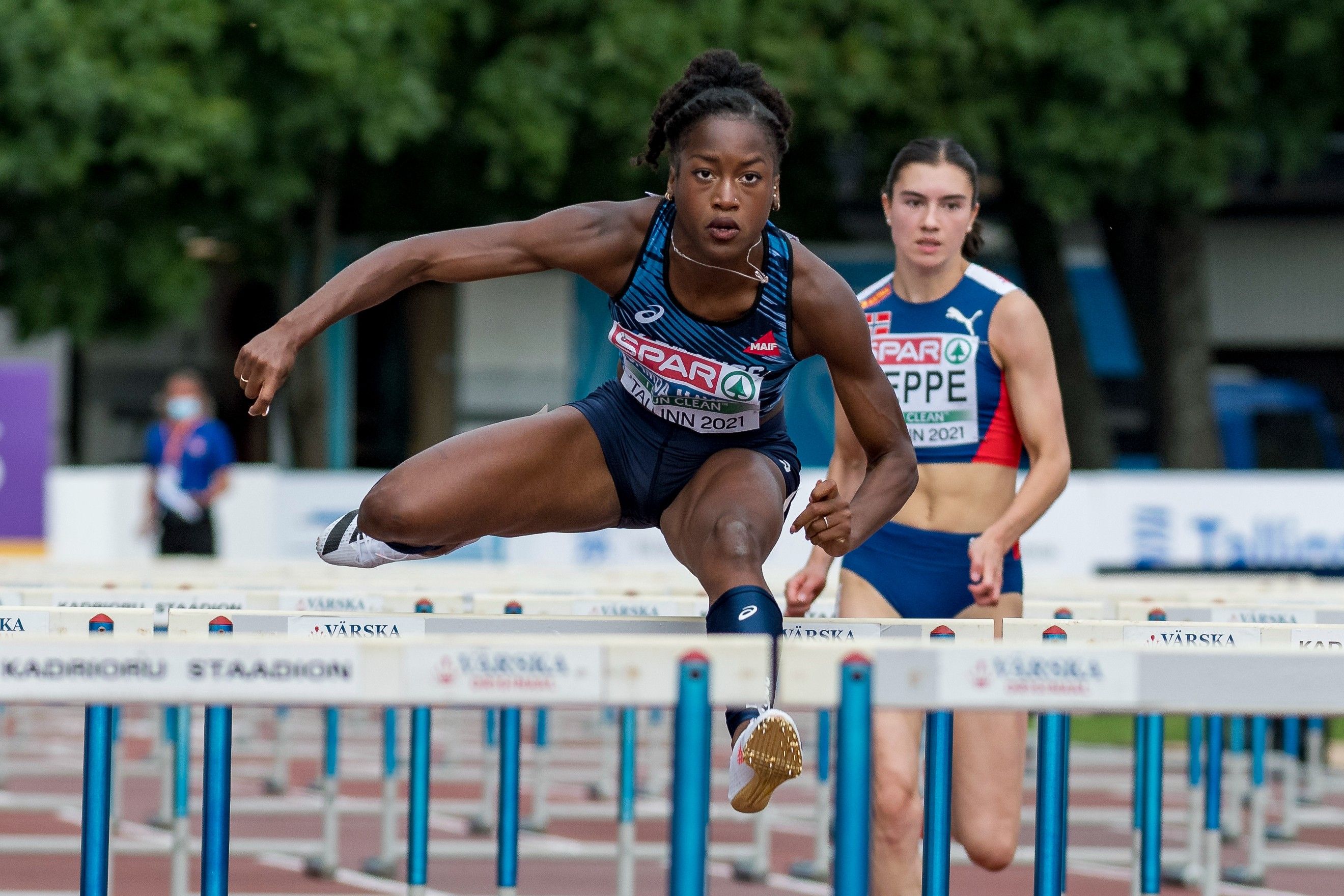 Cyrena Samba-Mayela at the European U23 Championships (© Getty Images)

Those performances marked her out as a big contender in Belgrade, but rather than worry about her rivals or get stressed about the fine margins separating success from failure, Samba-Mayela took a different attitude into the championships.

She might have been denied a chance to compete in Tokyo, but what she did pick up was valuable experience, “being around champions” and seeing how they operate on the biggest stage. “So I’m thankful for that,” she says.

In the 60m hurdles final in Belgrade, Samba-Mayela got a flying start and midway through the race, it was her against Devynne Charlton of The Bahamas and USA’s Gabby Cunningham in the race for gold.

The 21-year-old French star proved just too quick, her hurdling too crisp, for the others to match, and Samba-Mayela took victory in 7.78, with Charlton second in 7.81 and Cunningham third in 7.87.

As it was after the heat and semifinal, Samba-Mayela did not sprint up the bend and into the crash pads, but slowed to an abrupt stop just short of them, collapsing to her knees. She cried a river of joyful tears, her exulted screams ringing out around the arena.

“I'm thankful to all people, and especially to my coach, who never stopped believing in me,” she said a while later.

As she turns her focus to the outdoor season, Samba-Mayela knows her indoor campaign was the perfect platform to help her edge closer to the world’s best in the 100m hurdles.

With the World Athletics Championships Eugene22 in July and the European Championships in Munich in August, there’ll be ample opportunity to chase more medals. Her hope for the summer?

Then there’s the whole matter of Paris 2024, when Samba-Mayela will be 23.

The biggest show in sport will arrive in her home city that summer and with her talent and current trajectory, few would bet against Samba-Mayela making a huge impact – her Olympic dream deferred, but not yet denied. 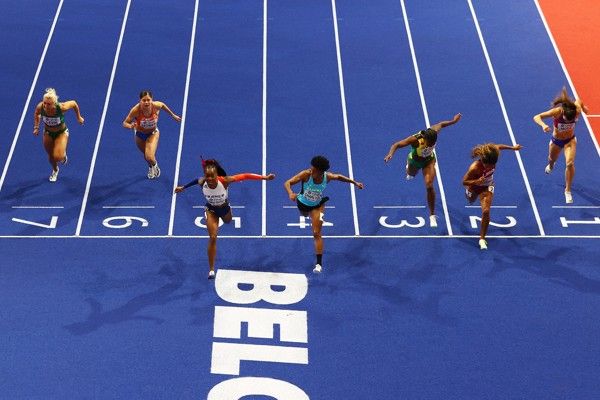