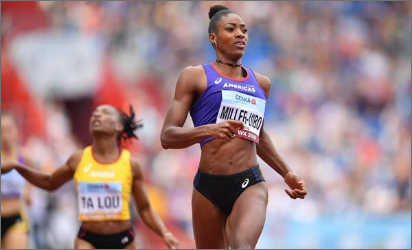 Germany’s Niklas Kaul and Carolin Schafer will be among the athletes looking to secure their Olympic spots when the World Athletics Challenge – Combined Events moves on to the Stadtwerke Ratingen Mehrkampf-Meeting on 19-20 June. Warner targets win No.6 in Götzis

Canada’s multiple global medallist Damian Warner will aim to become the Hypo Meeting’s first six-time winner when he competes at the World Athletics Challenge – Combined Events meeting in Götzis, Austria, on 29-30 May. Damian Warner will look to make history at the Hypo Meeting in Götzis by becoming the first six-time winner at the World Athletics Challenge – Combined Events meeting on 29-30 May. Catching up with the world decathlon champion Niklas Kaul’s world U20 decathlon record of 8435 has been ratified, following validation of the post-event surveys that had to be undertaken at Grosseto’s Carlo Zecchini Stadium. Kevin Mayer produced a dominant victory in the Ultimate Garden Clash - Combined Events edition on Sunday (7), a unique triathlon competition that brought together three of the world's best decathletes competing in three countries on two continents. With most of the major athletics competitions and series of 2019 having reached their conclusion, we look back at the key moments of the year in each area of the sport. Kaul’s journey: ‘Once you’re doing decathlon, you don’t want to do anything else’

This time last year Niklas Kaul received an unexpected phone call. It was a call that, a week later, resulted in him competing in his first major international championship decathlon at the senior level. World bronze medallist Kai Kazmirek was injured and no longer able to go to the European Championships. And so Kaul was drafted into the German team alongside the eventual champion Arthur Abele. He finished fourth with a PB of 8220. Niklas Kaul has got an impressive list of accolades to his name for a combined events exponent of just 21 years of age, but the German decathlete made a further step forward when he won the European U23 crown in a championship best of 8572 in Gavle on Sunday (14). German decathlon sensation Nicklas Kaul broke the world U20 decathlon record* to highlight the final day of European U20 Championships at the Carlo Zecchini stadium in Grosseto, Italy, on Sunday (23). The tenth episode of the current season of IAAF Inside Athletics is available to watch online now and features an exclusive interview with Germany’s world U20 and world U18 decathlon champion Niklas Kaul.