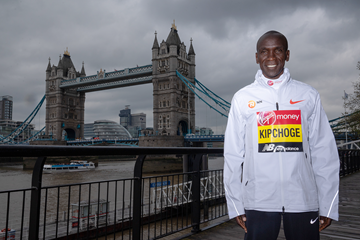 Can Eliud Kipchoge be beaten? That is the key question posed by Sunday’s Virgin Money London Marathon, an IAAF Gold Label race, as the mighty Kenyan goes to the start line for his first competitive outing since obliterating the marathon world record seven months ago.

The answer, on paper at least, is a resounding ‘no’. Kipchoge’s winning time of 2:01:39 in Berlin in September carved an astonishing 78 seconds out of the previous world mark, removing any doubt that he is the greatest marathon runner of all time.

Add to the mix Kipchoge’s intimidating race record of 11 marathon wins out of 12, which includes the 2016 Olympic title and three victories on the streets of London, and Sunday’s race begins to sound like a foregone conclusion.

Not even the presence of a fast-improving Mo Farah, world ranked No.7 and fresh from his maiden marathon victory in Chicago in the autumn, and last year’s London runner-up, the youthful and highly regarded Ethiopian Shura Kitata, world ranked No.4, suggests any realistic scenario other than a Kipchoge triumph in The Mall.

But Kipchoge, the 2018 IAAF World Athlete of the Year and world ranked No.1 in the marathon, is not buying it. Although he is more than happy with his pre-race preparations at home in Kenya, he is far too humble to believe in his own invincibility, insisting his philosophy in life is not to dwell on past achievements but focus on the future.

“Sport is about competition and anybody can be beaten,” he said. “Mo can beat me and the others can beat me. The best thing is if you just accept this. That’s the only way to enjoy the sport.

“It’s good to forget what you’ve achieved. It’s certainly a plus and a positive to concentrate totally on what you want. So, what I have achieved in the past is different to what I want on Sunday.

“I want to make sure that I win, to show that all that I have been doing in the last years comes out of the humbleness and the hard work in training.”

As is customary, the London organisers have assembled yet another star-studded cast list for both elite races, with the women’s line-up looking particularly stacked. It includes the winners of four out of the six Abbot World Marathon Majors and six athletes who have run sub-2:20.

But it is Kipchoge’s quest to become the first man to win four London titles that has set pulses racing ahead of this year’s event, not least because of the potential of a mouth-watering head-to-head with London-raised Farah.

With his four Olympic and six world titles on the track, the Briton sits alongside Kipchoge among the pantheon of distance-running greats, though he admits his switch to the marathon has been a steep learning curve.

His third-place finish in London last year, more than two minutes behind the triumphant Kipchoge, was an important lesson, prompting adjustments to his training regime and race strategy.

But his breakthrough Chicago Marathon win six months ago in a European record time of 2:05:11 places him on an upward trajectory as he approaches only his fourth race over 26.2 miles. Following a final three-month tune-up at altitude in Ethiopia, he is also more than happy with his physical shape.

“Marathon is completely different to the track and since racing against Eliud in London, having learned the hard way, I believe that I’ve learned a lot,” said Farah. “With each race you do get better. You get a bit more experience. After winning in Chicago, training has gone well and I’m just enjoying it.”

In fact, no fewer than seven athletes in Sunday’s field have a superior personal best to Farah, including Kenya’s former world record-holder, Wilson Kipsang, and five Ethiopians.

Among the Ethiopian contingent, Kitata finished 92 seconds ahead of Farah to take second place in last year’s London race by sticking to Kipchoge’s coat tails until three miles to go. He is far from fazed by Sunday’s rematch.

“I will try to beat Eliud this year,” said Kitata, who at 22 is 12 years younger than Kipchoge and 14 years Farah’s junior. “Last year I ran side-by-side with him, but this time I won’t just follow him. This year, God help me, I will beat him.”

The women’s race has been billed as the greatest and deepest line-up ever put together, with no obvious favourite. At the official press conference, the four current major marathon champions in the line-up – Vivian Cheruiyot (London), Mary Keitany (New York), Brigid Kosgei (Chicago) and Gladys Cherono (Berlin) – were full of mutual admiration. The all-Kenyan quartet are on friendly terms away from competition, though the bonhomie will cease the moment the starter’s gun is fired on Sunday.

Cheruiyot, world ranked No.2 in the marathon, ran a perfectly judged race in London last year to overtake Keitany, who paid the price for running at a suicidal pace with male pacemakers in the opening half as she went in pursuit of Paula Radcliffe’s world record of 2:15:25. She eventually faded to a weary fifth.

Keitany, who turned the tables on Cheruiyot by winning her fourth New York title in November and is currently world ranked No.23, is not obsessing about the clock this time and has her eyes set on equalling Norwegian Ingrid Kristiansen’s record tally of four London victories.

Like Farah, Cheruiyot is a relative marathon novice following a glittering career on the track and feels there is plenty of room for improvement.

Having lowered her personal best at the Lisbon Half Marathon in March, she sees no reason why she cannot improve on her marathon best of 2:18:31, which she clocked in London a year ago.

“My shape is better than last year and if the weather is good, I know I’m going to run my personal best,” she said.

Cherono, who completed a hat-trick of Berlin victories last year with a personal best of 2:18:11 and is world ranked No.13, is also confident about her shape and believes the women-only world record of 2:17:01, set by Keitany in London two years ago, could well come under threat on Sunday if the weather behaves.

Kosgei, last year’s runner-up and world ranked No.4, is the fourth quickest in the field after clocking 2:18:35 to win in Chicago but has shown outstanding half-marathon form in recent months, smashing her personal best in Houston and then lowering it further in Bahrain.

She has chalked up five victories and three runner-up spots in her nine marathons to date and could well be one to watch. With sub 2:20 Ethiopians Roza Dereje and Birhane Dibaba also in contention, the race looks wide open.

Simon Hart for the IAAF