The nature of his recent victories had hinted at a big breakthrough, but even Elliot Giles appeared surprised when he crossed the line in 1:43.63 to win the men's 800m at the Copernicus Cup – part of the World Athletics Indoor Tour – in Torun on Wednesday (17).

Following his 1:45.5 win in Karlsruhe and 1:45.49 victory in Lievin, the 2016 European bronze medallist had been targeting Sebastian Coe’s British indoor record of 1:44.91, which had stood for almost 38 years. Giles far exceeded his target, though, and improved Coe’s mark by more than a second, moving up to second place on the world indoor all-time list.

Only the legendary Wilson Kipketer, with his 1:42.67 world indoor record from the 1997 World Indoor Championships, has ever run faster indoors.

Giles positioned himself well for the first two laps and was a couple of strides behind the pacemaker, who went through 200m in 23.99 and 400m in 50.14. Once the pacemaker stepped aside, Giles led the pack but fellow Briton Jamie Webb briefly moved up on to his shoulder as they went through 600m in 1:17.28.

Realising he was operating at record pace, Giles cranked up the tempo for the final circuit – covered in 26.35 – and crossed the line a clear winner in 1:43.63.

"I'm overwhelmed right now with the time I ran!"

Webb finished second in a huge PB of 1:44.54 – also inside Coe’s previous national indoor record – to move up to ninth on the world indoor all-time list. Andreas Kramer was third in a Swedish indoor record of 1:45.09, while world indoor champion Adam Kszczot was fourth in 1:45.22 – his fastest indoor performance for seven years.

“I felt in great shape and I thought I could win, but I’m overwhelmed right now with the time I ran,” said Giles. “I was just executing my tactics by following the pace and then making a move after 400m. Strong domestic competition is something that really motivates us and makes us all better.”

The men’s 800m was one of eight disciplines in which the meeting record fell. And three meeting records were set by Ethiopian middle-distance runners.

Teenager Lemlem Hailu showed her recent Lievin victory wasn’t a fluke as she adopted similar tactics to sprint away from steeplechase world record-holder Beatrice Chepkoech on the final lap.

World indoor record-holder Genzebe Dibaba, looking out of sorts, stepped out of the race after just two minutes of running and later limped off the track. It left Hailu, Chepkoech and Ethiopia’s Fantu Worku in the lead pack, following the pace maker through 1000m in 2:44.60. 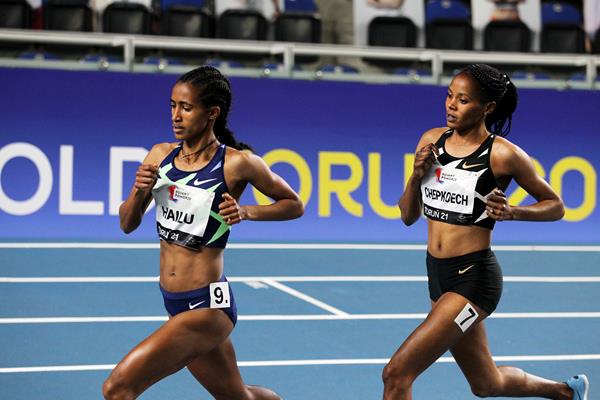 The pace dipped slightly in the second kilometre, but it picked up again towards the end. Worku was dropped with two laps remaining, leaving Hailu and Chepkoech to battle it out. As the bell sounded for the final lap, Hailu kicked past Chepkoech into the front and sprinted away to win in a world-leading 8:31.24. Chepkoech, who set a world record on the roads for 5km last weekend, was second in a PB of 8:31.72 and Worku was third in 8:40.04.

It’s the first time the women’s 3000m had been held at the Copernicus Cup, so Hailu’s winning time was a meeting record by default. It’s also the fastest ever indoor performance by a teenager.

World 5000m silver medallist Selemon Barega continued his foray into the shorter distances and emerged the winner of the men’s 1500m in a meeting record.

Paced through 800m in 1:54.6, Barega sat at the front of the pack ahead of Kenya’s Bethwell Birgen. Barega wound up the pace and moved into top gear at the bell, opening up a sizeable gap on the rest of the field.

He charged through the line in 3:32.97, chopping almost two seconds off the PB he set earlier this month in Metz and smashing the previous meeting record of 3:35.57. He now sits at fifth place on the world indoor all-time list. 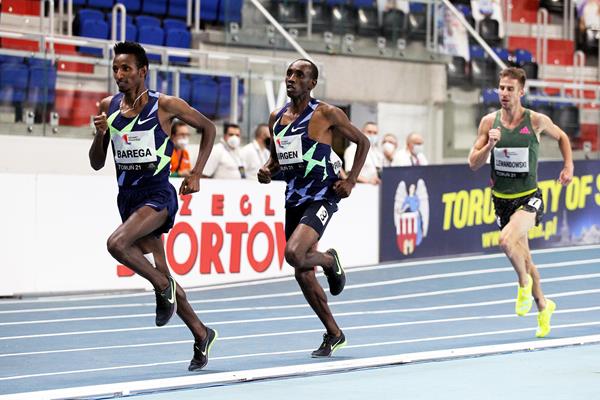 In between Hailu’s and Barega’s victories, Habitam Alemu won the women’s 800m in convincing fashion. The opening laps were fast with the pacemaker going through half way in 57.63. Alemu then found herself in front with a comfortable margin, which she managed to increase through 600m (1:28.17).

With a 30-second final lap, Alemu stopped the clock in a meeting record of 1:58.19 – a time that would have been an Ethiopian indoor record, had Gudaf Tsegay not clocked 1:57.52 in Val-de-Reuil last weekend.

Former meeting record-holder Joanna Jozwik was second in 2:00.42 and Nadia Power broke her own Irish indoor record in third with 2:00.98.

World champion Grant Holloway extended his 2021 winning streak in the 60m hurdles, although it took several attempts for the final to get underway.

After three false – or faulty –starts, Holloway got out of the blocks well and powered to victory in 7.38, taking 0.05 off the meeting record he had set in the heats. France’s Wilhem Belocian was a distant second in 7.57. 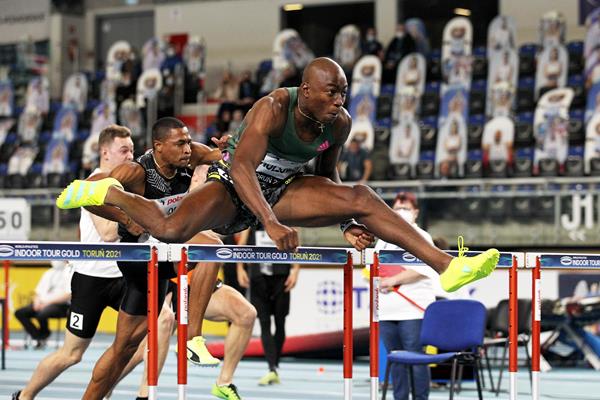 World indoor silver medallist Christina Clemons reclaimed the world-leading mark in the women’s 60m hurdles, producing her most convincing run of the season.

The US sprint hurdler won in a meeting record of 7.81 and finished 0.17 ahead of Poland’s Karolina Koleczek, who set a PB of 7.98 in second place.

The 20-year-old Dutch sprinter ran a composed first lap, allowing training partner Lieke Klaver to take it out with an opening 23.92 200m. A composed Bol then eased past Klaver on the back straight and opened up a significant lead, crossing the line in a meeting record of 50.66 – faster than the outdoor Dutch record for 400m. 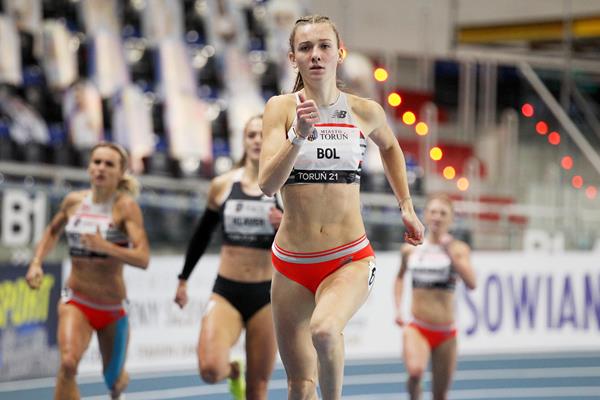 European champion Justyna Swiety-Ersetic overtook Klaver in the closing stages to finish second in 51.80 with Klaver placing third in 51.92.

The women’s 60m and men’s high jump made their final appearances in the World Athletics Indoor Tour Gold series for 2021.

Javianne Oliver notched up another 60m victory, powering away to win in 7.08 to equal the world lead set by Dina Asher-Smith in Karlsruhe last month, and securing the overall series title. Ajla del Ponte was second in 7.15 and Ewa Swoboda third in 7.16. 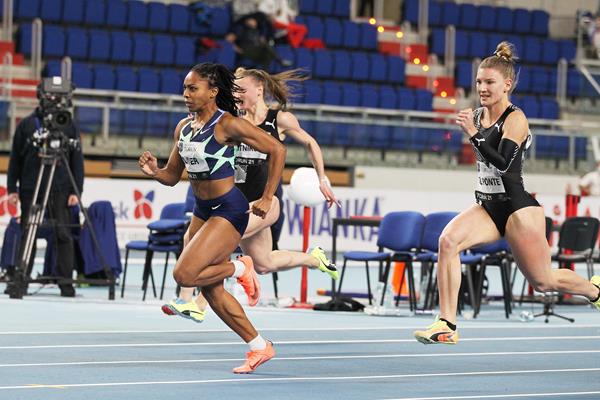 There was surprisingly good depth in the men’s high jump as the top three finishers established a shared world lead and meeting record of 2.34m.

Maksim Nedasekau of Belarus won on countback from Ukraine’s Andriy Protsenko with Italy’s Gianmarco Tamberi finishing third. Tamberi’s five-point haul tonight was enough to maintain his lead at the top of the World Indoor Tour standings.

There was also a three-way tie in the men’s pole vault, which was won on countback by world champion Sam Kendricks. The US vaulter cleared a best of 5.80m, as did Poland’s Piotr Lisek and Ernest Obiena of the Philippines, but Kendricks’ first-time clearance at that height gave him the advantage.

Elsewhere, Greece’s Paraskevi Papachristou sailed out to an indoor PB of 14.60m to win the women’s triple jump with a meeting record.

BACK
Pages related to this articleAthletes
Grant HOLLOWAY 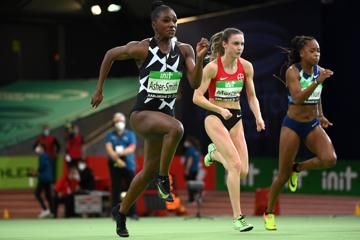 Dominant displays from Asher-Smith, Birgen an...