Kenya’s new 800m ace Wycliffe Kinyamal lit up a muggy night in the Shanghai Stadium on Saturday (12) for the second meeting of the 2018 IAAF Diamond League season.

If the opening meeting of the world’s premier athletics circuit belonged to the one-lappers, then the second was the domain of the middle-distance runners, as Commonwealth champion Kinyamal went inside 1:44 for the second time in his career to win in a meeting record, world lead and personal best of 1:43.91.

Bram Som took the pack through the first lap in 51.20, with Jonathan Kitilit in first and Brandon McBride just behind in third. With 250 metres remaining, 20-year-old Kinyamal began motoring.

Kitilit wouldn’t give up the goat, and the pair continued to duel through to the home straight. As both athletes began to tie up, Kinyamal edged into the lead within the final 20 metres to win, finishing 0.04 ahead of Kitilit.

“A PB and meeting record, the race was fine,” demurred Kinyamal. “We were fighting for the last 100 metres, but I was stronger and I knew it. I come from the same village as Rudisha, he was always my example. Now I take over.”

Poland’s Marcin Lewandowski beat the chase to finish third in 1:45.41.

Cheruiyot gets off to a flyer

A hot pace was set from the start, Cornelius Kiplangat leading them through 800 metres in 1:53. Young Ethiopian Samuel Tefera found himself at the front after the pacer dropped out, the world indoor champion looking startled before taking up the running. Abdelaati Iguider gave chase as Timothy Cheruiyot, who had been in second, sat in third.

The 2017 Diamond League champion Cheruiyot moved through the final bend, and although Tefera still held the lead on the straight, 22-year-old Cheruiyot‘s long stride saw him go first late to stop the clock in 3:31.48 – the fastest time by anyone this year.

Cheruiyot never doubted his kick. “I was sure I was going to win the race,” he said. “I needed to run a good time, and this race is good for the Diamond League points.”

Tefera recorded a personal best of 3:31.63, taking him to eighth on the world U20 all-time list, and finished more than a second ahead of Iguider.

Brianna McNeal continued her strong start to the season by winning the women’s 100m hurdles. World record-holder Kendra Harrison was smartest out of the blocks but faded at half way, as US indoor champion Sharika Nelvis – who celebrated her birthday yesterday – moved into the lead.

However, Olympic champion McNeal, who owns the world lead of 12.43, emerged off the last barrier to set a meeting record of 12.50, her first win on the IAAF Diamond League circuit since June 2016.

“I feel great and it was an intense competition,” said McNeal. “Other athletes are very strong. It was a big motivation to me to win in Shanghai after finishing second in Doha.”

US athletes occupied the top four spots, as Nelvis came home second ahead of Harrison and Jasmin Stowers.

Shaunae Miller-Uibo was dominant in the women’s 200m. The Olympic 400m champion from The Bahamas never looked short of the win, setting a meeting record of 22.06.

The 24-year-old came off the bend with a narrow lead over two-time world champion Dafne Schippers. Although she was close at half way, Schippers could only watch as Miller-Uibo powered across the line for a classy win.

Schippers, competing for the first time in China since she won the world title in Beijing in 2015, hung on for second in 22.34, 0.02 ahead of Jamaica’s Shericka Jackson in third.

Gardiner, who last week set a Bahamian record of 43.87 in Doha, got off to a swift start, but not quite as swift as Isaac Makwala. The Commonwealth champion set off like a man on a mission but was always in Gardiner’s sights. As the Motswana athlete wavered, the fastest man this year kept form to win in a meeting record of 43.99.

Olympic champion Dalilah Muhammad came into the women’s 400m hurdles having not bettered 55 seconds in two previous attempts this season. That changed as she took control of the opening track race of the night through the second bend.

Although Jamaica’s Janieve Russel, fastest of the field this season of those lining up, rallied off the final hurdle, Muhammad showed great strength to hold off the charge and cross the line in 53.77.

“I am pleased to run so quickly early in the season,” said Muhammad. “I have lacked a little motivation during training because there are no major championships. I just want to focus on the Diamond League.”

Russell, who in April claimed the Commonwealth Games title, was rewarded with a PB of 53.78 for her efforts.

Trepid McLeod is in the swing

After pulling out of the 200m in Doha, Omar McLeod admitted he didn’t know what to expect from his first 110m hurdles outing of this term. He needn’t have worried.

The Olympic champion took the lead from the first hurdle. Last year’s IAAF Diamond League champion, Sergey Shubenkov, quickly moved alongside him before fading through the middle third.

It was Orlando Ortega, running in lane eight, who emerged as the challenger to McLeod through the closing stages. But McLeod displayed his terrific track speed (the Jamaican has broken 10 seconds for the 100m) and a well-timed dip to win in 13.16 – just 0.01 ahead of Ortega.

“I wanted to see where I’m at,” said McLeod, who was pleased to get his season under way. “Although it’s an off year, and it’s hard to have the will and drive, I want to keep the winning streak going and get that diamond.”

There was no Chinese winner in the men’s 100m, which brought the meeting to a close in torrid rain.

Su Bingtian showed just how he was able to take world indoor 60m silver in March, as he led through the first half of the race. However, the Chinese star couldn’t match Reece Prescod’s closing speed, as the Briton claimed a maiden IAAF Diamond League win in 10.04.

“When I saw the rain tonight I thought, 'Yes!' – I train in these conditions all the time in the East Midlands [of England],” said the 22-year-old.

Su had to settle for second place in 10.05, with world champion Justin Gatlin back in seventh in 10.20.

Chelimo was leading with metres to go until his legs gave out. As he dived for the line, Bahrain’s Balew remained cool to record the narrow win by just 0.02.

In the women’s 3000m steeplechase – also a non-scoring event – Beatrice Chepkoech won after Norah Jeruto slipped on the wet track in a sprint for the line. Chepkoech didn’t have to push for the win, yet still recorded a world-leading 9:07.27. Jeruto picked herself up for second.

Thomas Byrne for the IAAF

BACK
Pages related to this articleAthletes
Wyclife KINYAMAL 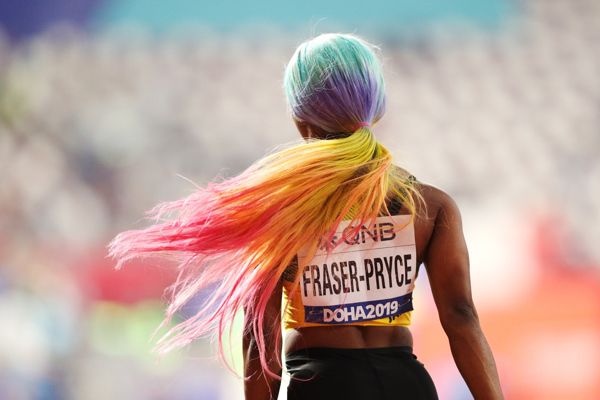