Tomohiro Shinno, winner of the high jump at the Japanese Championships (© Getty Images)

Rising high jump talent Tomohiro Shinno showed his recent breakthrough wasn’t a one-off by winning his event at the Japanese Championships in Niigata with a leap of 2.30m.

The 24-year-old added three centimetres to his PB two weeks ago when winning the Japanese Corporate Championships with 2.31m. In Niigata on Saturday, in what was just his third competition of the year, he came within one centimetre of his lifetime best to earn his first senior national title.

It was quite the turnaround from 2019 when he failed to record a valid height at the National Championships, despite being one of the medal favourites. Shinno’s recent PB is just two centimetres shy of the outdoor Japanese record set 14 years ago.

Championship records were tied in both of the sprint hurdles finals.

Like Shinno, Taio Kanai had unfinished business after being disqualified in the semifinals at last year’s National Championships. This year the former national record-holder made no such mistake and won in 13.36 to regain his national title from 2018.

The women’s event was similarly competitive. Masumi Aoki sped to victory in 13.02 to get the better of national record-holder Asuka Terada (13.14). While Aoki’s time was a PB, at the end of August she ran a marginally wind-assisted 12.87 (2.1m/s), the fastest ever clocking by a Japanese athlete in any conditions.

There were close contests in both javelin finals. The two favourites in the men’s event – 2016 Olympic finalist Ryohei Arai and 2012 Olympic finalist Genki Dean – struggled in the early rounds. At the half-way point, Arai was in second place with 76.70m while Dean was down in seventh place.

But Dean, winner at the Continental Tour Gold meeting in Tokyo earlier this year, came alive in the penultimate round, throwing 80.07m to move into the lead. Arai wasn’t done, however, and responded with 81.57m in the final round to take the victory.

The women’s javelin played out in similar fashion with some big changes in the final few rounds. Yuka Sato led from the outset with her opening effort of 59.03m. National record-holder Haruka Kitaguchi opened with 57.42m but then improved to 59.30m in round four to move into the lead.

But Sato saved her best effort for the final round and sent her spear out to 59.32m to win by two centimetres, landing her first national title.

Elsewhere, world U20 champion Nozomi Tanaka was one of the top performers on the track. Including heats, she raced four times across the three days of competition, winning the 1500m on Friday by five seconds in 4:10.21 and then placing fourth in the 800m in a PB of 2:04.76 in a race won by Asian U20 champion Ayaka Kawata (2:03.54).

BACK
Pages related to this articleAthletes
Masumi AOKI 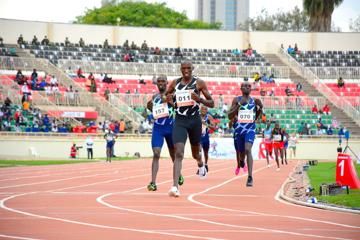