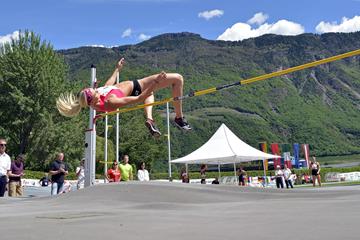 Rosenberg and Kunz lead overnight in Lana, Helcelet and Halverson poised to strike

Kristjan Rosenberg from Estonia and Annie Kunz from the USA are the overnight leaders at the 32nd edition of the Multistars, but Adam Sebastian Helcelet and Allison Reaser-Halverson look poised to challenge for victory at the IAAF Combined Events Challenge meeting in Lana.

Rosenberg ended the first day of the men’s decathlon with 4230, putting him ahead of Czech Republic’s Jan Dolezal (4141), Jean Baptiste Nutte from Belgium (4081) and last year’s Multistars winner Martin Roe from Norway (4073).

The USA claimed the top-three positions after the first four events in the women’s heptathlon. Kunz leads overnight with 3595 ahead of Riley Cooks (3587) and Reaser-Halverson (3472).

Roe scored his second consecutive individual win in the long jump with 7.44m (-0.4m/s), increasing his lead to 38 points over Maruyama, who jumped 7.31m.

The Norwegian record-holder consolidated his leading position in the overall standings after producing 14.66m in the shot put. Dolezal moved up into second place thanks to his best attempt of 15.07m. Compatriot Helcelet threw 15.25m to climb from eighth to third position ahead of Rosenberg.

Colombia’s José Gregorio Lemos Rivas set a meeting record of 16.62m in the shot put, moving him up to fifth place overall.

Rosenberg caused a major change to the overall standings in the high jump by moving from fourth to first place after clearing 2.10m, just one centimetre shy of his PB. Helcelet cleared 2.01m, moving into second place ahead of Roe, who jumped 1.92m.

Rosenberg capped a solid first day with 48.87 in the 400m, wrapping up the first day with 4230, his best ever day-one score. The 24-year-old is on course to break his PB of 7907 but he may need to score well in excess of 8000 points if he is to hold off the likes of Helcelet, Dolezal and Mathias Brugger.

Helcelet clocked 50.81 in the 400m and dropped to sixth in the overall standings, but he has a strong second day and can be expected to climb up the leader board tomorrow.

Dolezal currently sits just 89 points behind Rosenberg. Brugger was fastest in the 400m, clocking 48.16 to move up to fourth overall, tied with Roe. Both men are on schedule to better 8000 points.

US trio at the top

Kunz – along with Kate O’Connor from Ireland and Katie Stainton from Great Britain – cleared 1.72m in the high jump to take a 10-point lead over Cooks, who jumped 1.69m.

Kunz increased her lead 79 points thanks to a 14.15m effort in the shot put. Young Dutch heptathlete Marljke Esselink improved her position in the overall standings, moving from eighth to third after producing her best release of 13.39m.

Cooks closed the gap on Kunz in the 200m, clocking 24.27 to the leader’s 25.03 to reduce the differential to just eight points. But Reaser-Halverson, who ran 24.28 in the 200m to end the day in third place overall, is stronger than her compatriots in tomorrow’s three disciplines and could challenge for the victory.

Brazil’s Vanessa Chefer-Spinola, the 2016 Multistars winner, ended the first day in fifth place overall but can also be expected to make up ground tomorrow.