Have some crayons or coloured pencils? Then get to work colouring and getting to know some of our sport's biggest stars.

Download the pictures here [English | Spanish | French], print them out, and get colouring! 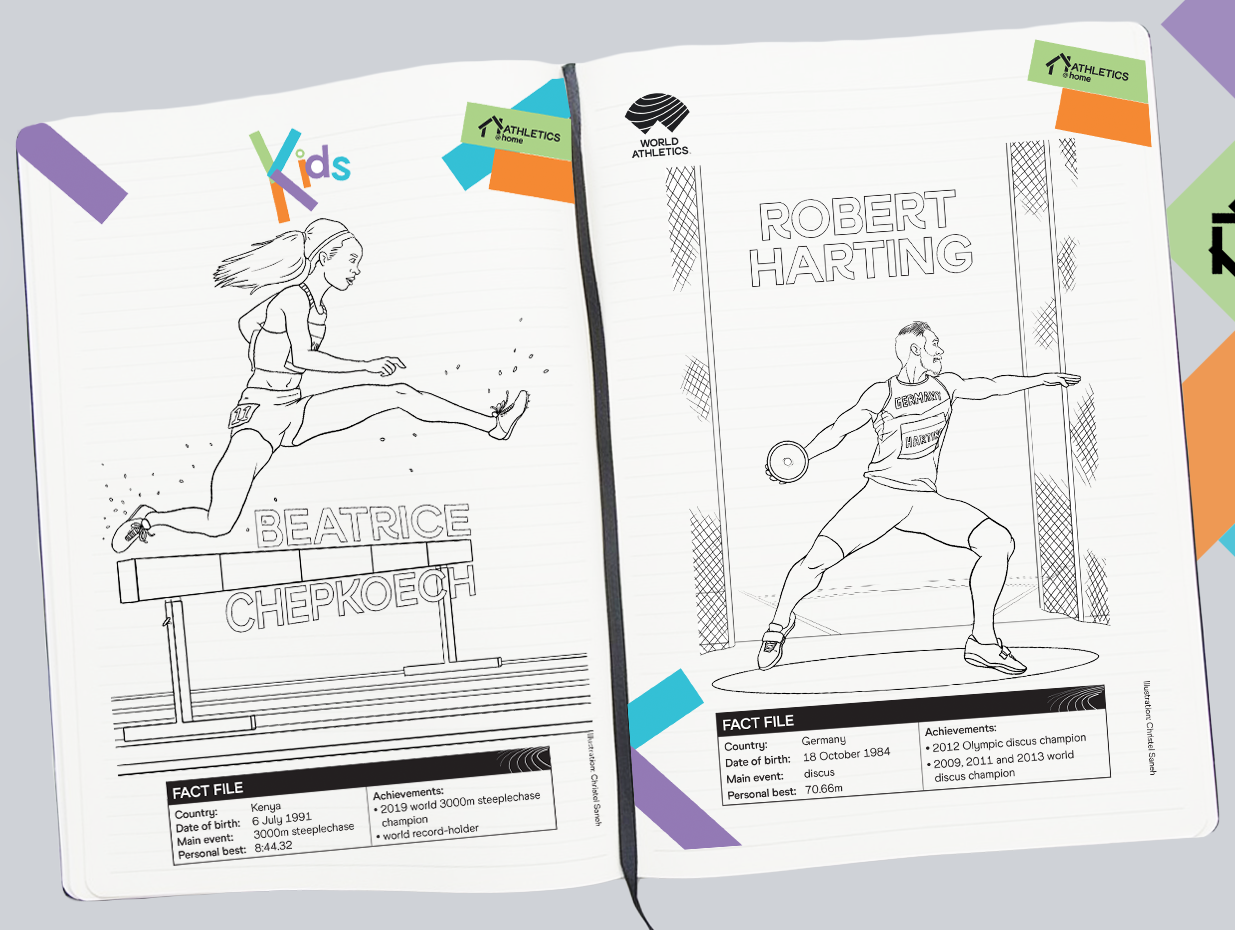 Books have and will continue to be written about Bolt, arguably the finest sprinter in history, who was amassed a collection of 8 Olympic gold medals and 10 world championships titles, and remains the 100m (9.58) and 200m (19.19) world record holder. Rojas, just 24, has already collected four world titles in the triple jump, the last two indoors and last two outdoors.

OK - download the pictures [English | Spanish | French], print them out and get to work. 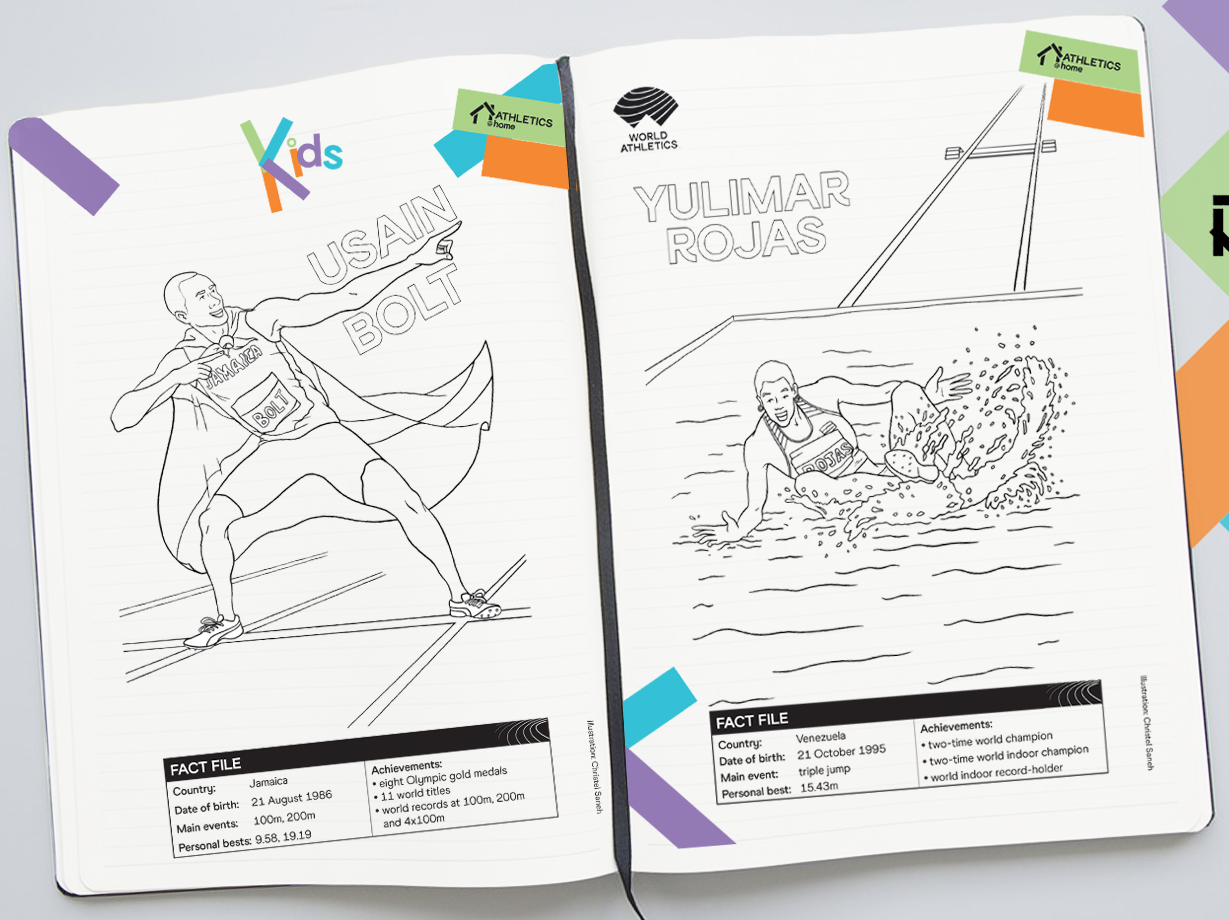 Previously we continued the series with two other all-time greats: Tirunesh Dibaba of Ethiopia and Japan's Koji Murofushi.

Dibaba is one of the finest distance runners ever, having collected two world 5000m titles, three world 10,000m crowns, three Olympic gold and four world cross country triumphs. Murofushi, the 2004 Olympic champion in the hammer throw, also spun to the world title in 2011.

Download the pictures [English | Spanish | French], get them printed and get to work. 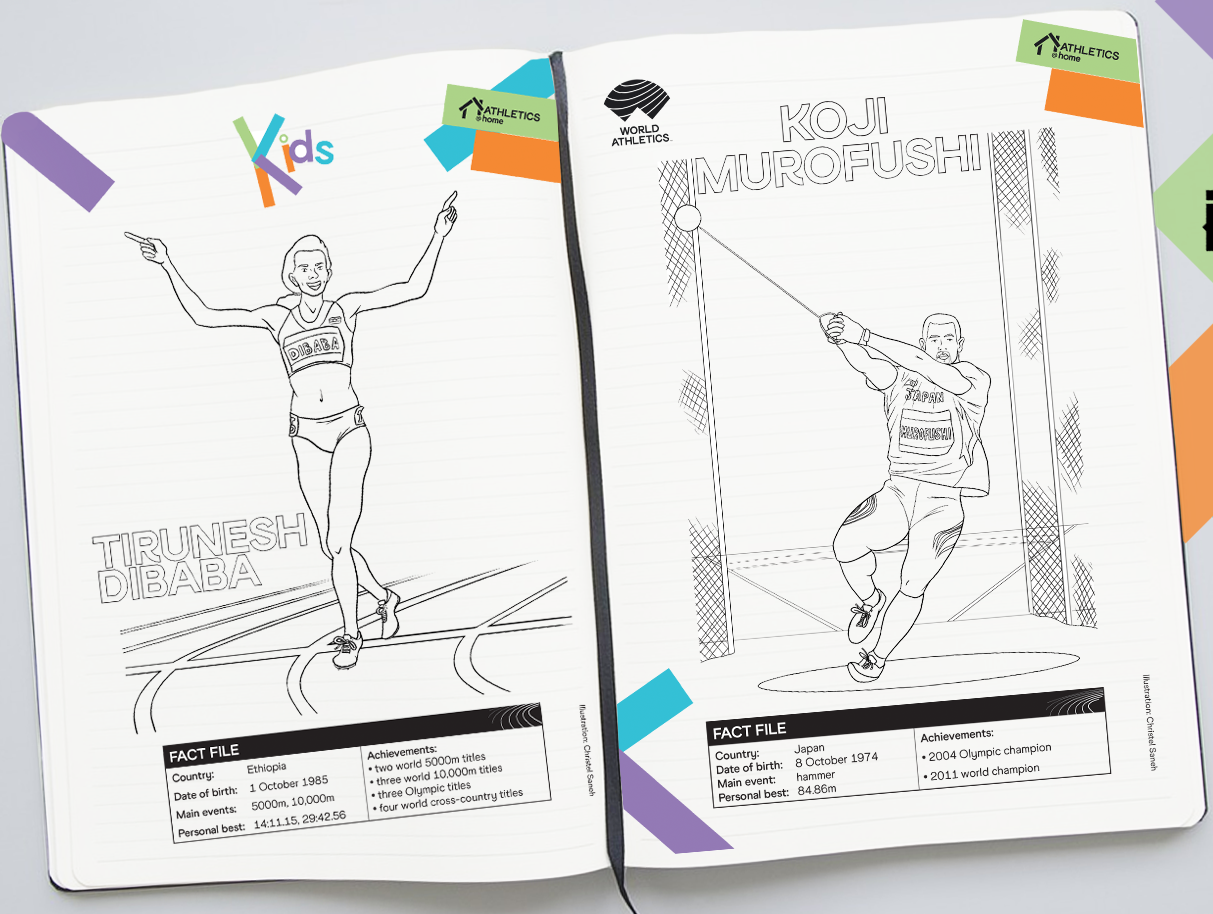 Pérez, a race walking legend, won the 20km race walk at the 1996 Olympic Games and three successive world titles over the distance at the 2003, 2005 and 2007 World Championships. The Ecuadorian star also held the world record from 2003 to 2007.

Thiam won heptathlon gold at the 2016 Olympics and 2017 World Championships and with a lifetime best of 7013 points, the Belgian superstar ranks third on the all-time list. Download the pictures [English | Spanish | French], get them printed and get to work. 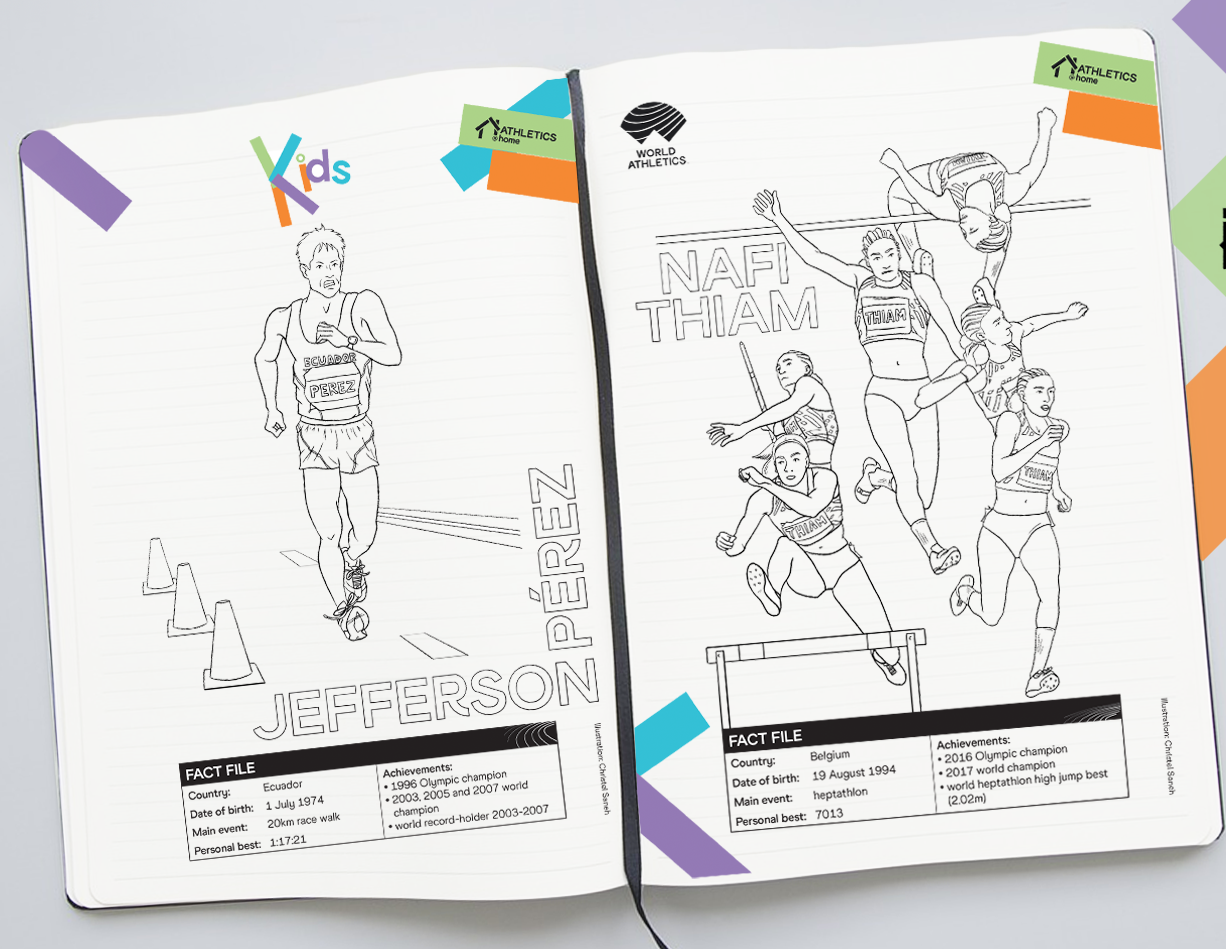 And before that, we featured two more icons: Allyson Felix, the most decorated athlete in World Athletics Championships history and Eliud Kipchoge, the world record holder in the marathon.

Felix has won 18 medals at World Championships, including three world 200m titles and one at 400m. She has also collected nine Olympic medals - including 200m gold in 2012 - to tie Merlene Ottey as the most decorated female track and field athlete in Olympic history.

Kipchoge, who won the Olympic marathon title in 2016, holds the world record for the distance with 2:01:39 and last year broke the two-hour barrier in an exhibition event in Vienna. Download the pictures, print them out, and get started. 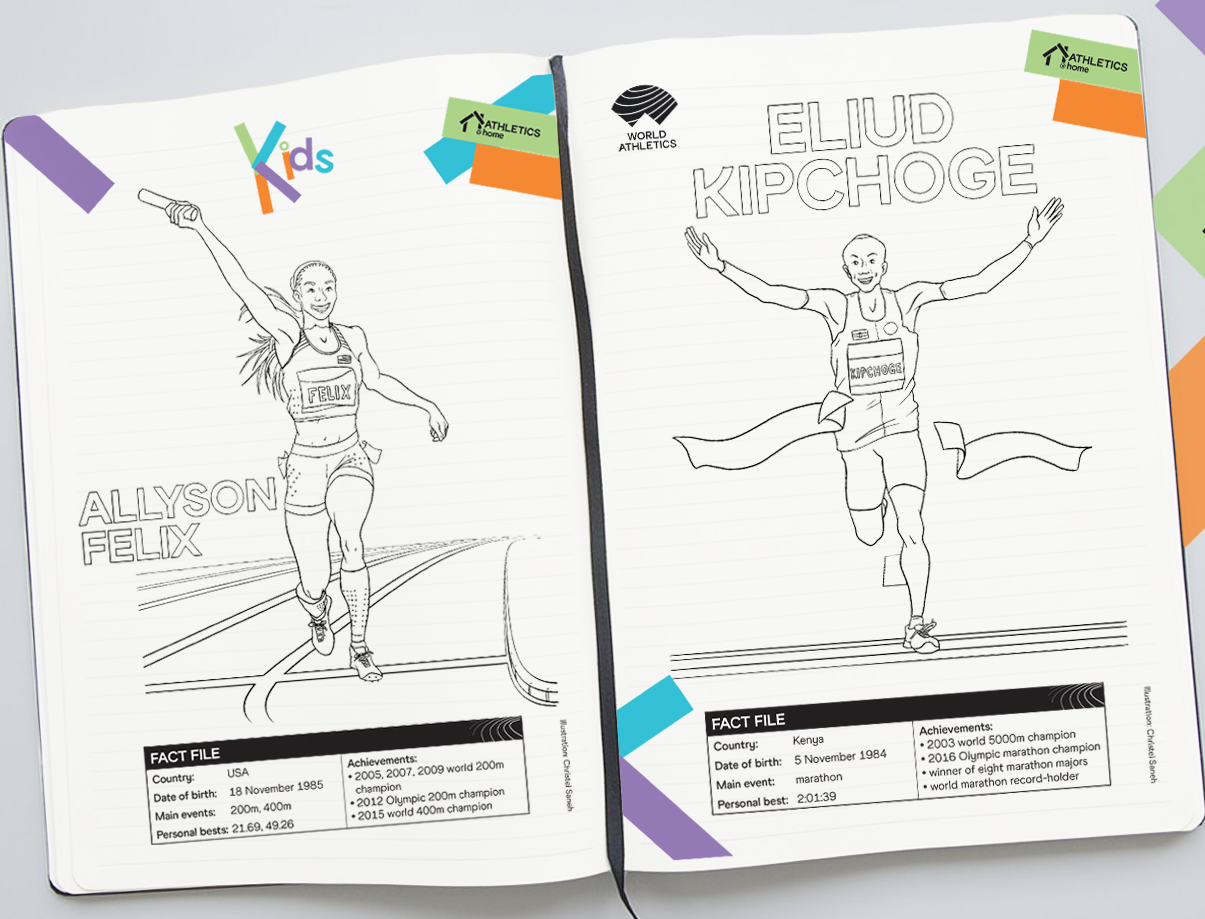 Freeman raced to back-to-back world 400m titles in 1997 and 1999 before taking the Olympic crown before a home crowd of 115,000 at Sydney's Olympic Stadium in 2000, ten days after lighting the Olympic Cauldron.

Just download the pictures, get them printed, and colour away. 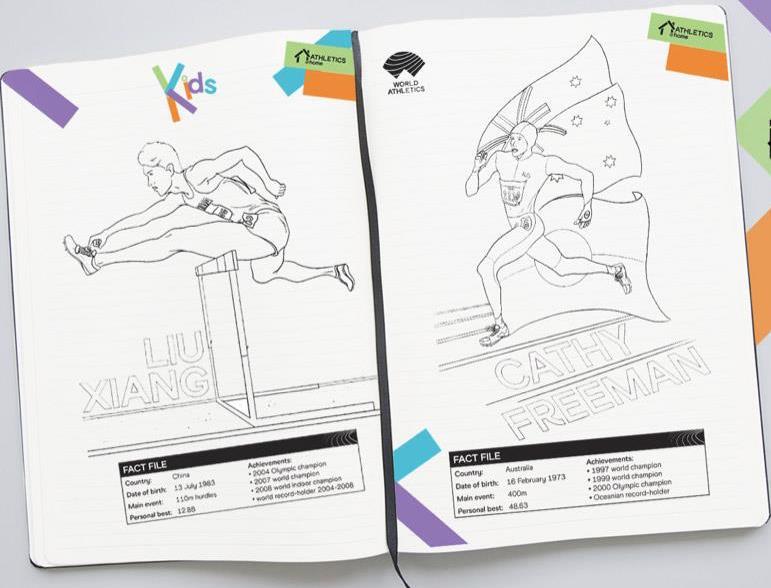