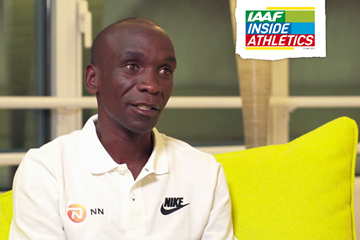 Eliud Kipchoge stars in the sixth episode of the latest season of IAAF Inside Athletics.

Kipchoge shattered the world record in the marathon in Berlin last September, clocking 2:01:39 to clip a massive 78 seconds from the previous record. Kipchoge made his breakout at the 2003 World Championships in Paris where, at the age of 18, took the world 5000m title. More medals over the distance followed, but he found his true calling over the marathon, winning 10 of the 11 races he's contested over the distance, including the 2016 Olympic title.

He'll race next in at the Virgin London Marathon on Sunday 28 April.