Rogers, Brazier and Taylor ready for top-quality test in Eugene

Global medallists Raevyn Rogers, Donavan Brazier and Christian Taylor are preparing for an early-season top-quality test of their form at the USATF Grand Prix – the first World Athletics Continental Tour Gold standard meeting of 2021 – on Saturday (24).

As well as offering the opportunity for some high-class clashes, the event also gives the US trio the chance to compete at Eugene’s recently renovated Hayward Field, which will stage the US Olympic Trials in June and this weekend welcomes athletes for its first professional competition since 2018.

“I am very nervous and excited to compete at the new Hayward,” said Taylor, the four-time world and two-time Olympic triple jump champion. “I had the previous stadium record and had lifelong memories made in front of the grandstands. This is a glorious new beginning but also has that special sense of the unknown.

“This will be a very serious competition for us,” he added, “to have an idea of exactly where we are and what areas we need to focus on moving forward.”

While Taylor has fond memories, world 800m champion Brazier is looking to make up for the disappointment he felt when he last raced at the iconic venue five years ago.

“I’m really excited to race there,” said the 24-year-old, who this time steps up to compete over 1500m. “The last time I raced there I ran pretty bad, I think it was the Olympic Trials in 2016, so I’d like to get the monkey off my back and finally start racing good again in Eugene.

“We’re going to see where we’re at this weekend and that’s part of the reason why we’re doing the 1500m instead of 800m.” 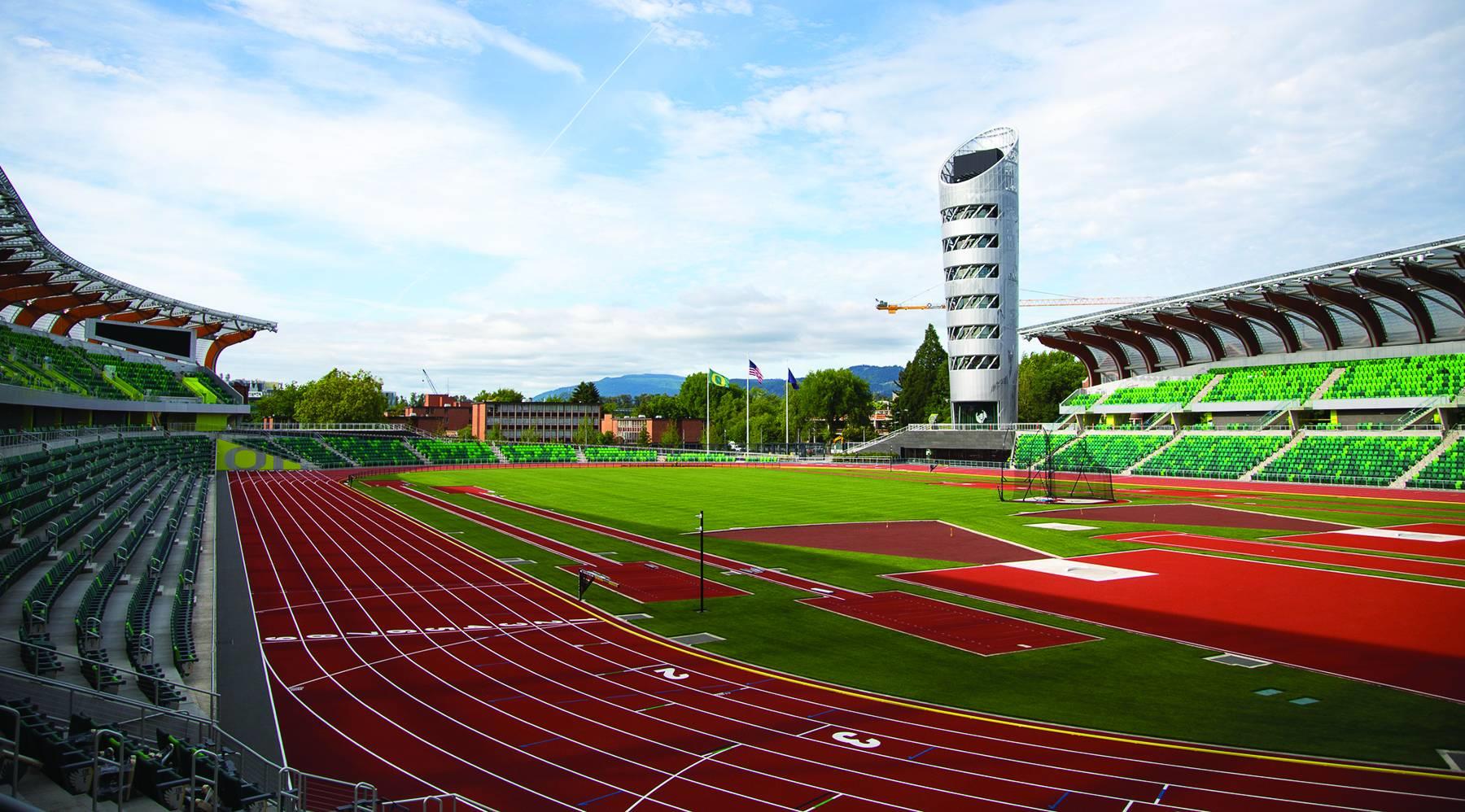 Rogers – star of the track and tower

For Rogers, it's a sense of ‘being home’.

“It is a huge weekend, especially to be running the 800m at Eugene,” said the world 800m silver medallist, who won multiple NCAA titles while racing for the University of Oregon. “I’m just looking forward to kicking it (her 800m season) off and seeing where all of this hard work in practise will lead to.”

Rogers is one of five icons – along with legendary coach Bill Bowerman, Steve Prefontaine, Ashton Eaton and Otis Davis – pictured on the Tower at Hayward Field and on whether there will be any extra pressure to perform, the 24-year-old said: “Just to be able to run the 800m at the ribbon-cutting meet, I did express (to her coach, Pete Julian) ‘you want me to do my first 800m in Eugene at the new stadium?!’ Of course, I was factoring in some of that pressure, but he was very reassuring to understand that the focus is about June and of course later on, God willing, the Olympics.

“It’s more to see where we are and get some races under our belt. That helped a lot to ease some of those outside thoughts in my head in regards to factoring in the pressure of running at the stadium.”

As well as it being the ‘ribbon-cutting’ professional competition at the reimagined Hayward Field – which will host next year’s World Athletics Championships Oregon22 – the event also kicks off this year’s Continental Tour Gold-standard series of meetings. The aim of the Tour is to offer a coherent global series of the best international one-day meetings outside of the Wanda Diamond League.

“I’m excited about the fact that we are getting some World Athletics type of races in,” said Rogers. “I feel like we are still kind of holding on to the slowness of last year, with things not being open, but now people are feeling like vaccinations are a little bit more allowing of us getting outside and being able to do things. And so now that we are able to focus on getting some good competition and more races in, I think it will help get more of that type of competitive experience that we have when it comes to the Olympics, because this is really necessary.

"I feel like as we get into championship season, since it is in almost two months, it’s super necessary and the time window to be able to get those type of races in is very short. So the fact that they are trying to implement this World Athletics Continental Tour will help get those Diamond League type of races and experiences in, instead of just having to have them straight at the Olympics.”

Following the Continental Tour Gold season opener in Eugene, the series will move on to California, Tokyo, Ostrava and Boston in May before meetings in Hengelo, Turku, Bydgoszcz and Szekesfehervar ahead of the Olympic Games in Tokyo.

BACK
Pages related to this articleAthletes
Christian TAYLOR